Did the Pop Star Room of Doom here with a full group of reasonably experienced ppl, and barely made it out. The main draw of the room is that it's very different than traditional escape rooms: the time loop concept was interesting and is why I'm rating this room as high as I am, and I appreciate that they tried something out of the ordinary.

Unfortunately, I found the execution somewhat lacking: the actors were all good, but the main puzzles just weren't that interesting, and there was a particular thing you had to keep on doing through the game that felt like it was unnecessarily added to the room as filler. The game is weird in that there isn't really that much to do in the game in general, so an individual person will probably contribute exactly one key insight since most of the puzzles are based on observation.

This probably is worth checking out for escape room enthusiasts simply due to the premise and novelty of the room, but I imagine that if the idea catches on and more companies starting doing rooms like this (which is honestly not super likely to happen due to the additional cost needed to make this work) then this will end up being a more average experience.

Your favorite 90s pop star lies dead in their apartment. Stuck behind a window across the street, you and your friends helplessly witness the scene. But before the shock sets in, time suddenly rewinds to mere minutes before their death!

You try desperately to save them, but every attempt ends in failure, causing the time loop to reset. With just 10 loops left before the future is set in stone, can you find a way to save the pop star’s life? It’s time to change their fate and escape the time loop! 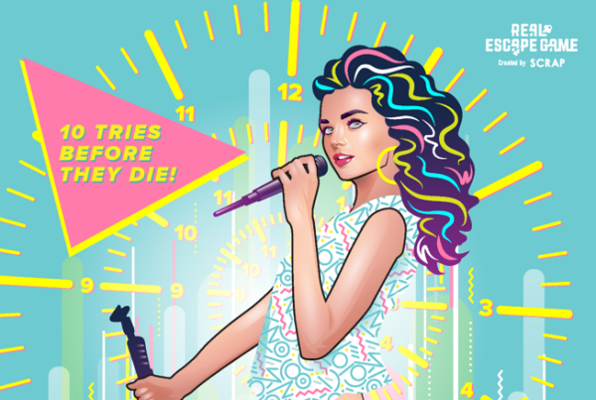