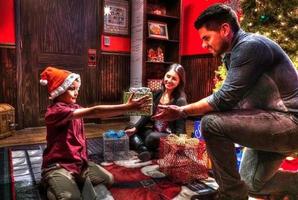 Awesome experience for the whole family! We first did the Murder Mansion and after having such a great time we immediately booked Shanghaied and did that room the same night! Already planning the next trip to go back to do the other two rooms. Kids even had a great time and were able to help with puzzles. Game Master was awesome and helped with clues as we needed. As first timers we were able to escape both rooms!

You have been relaxing in Hong Kong harbor celebrating Christmas and a friendly man has befriended you and started to buy you drinks. That is the last thing you remember that night.

The next day you wake aboard the huge 3-masted 800-ton Chinese ship called the Keying that has set sail on the arduous and risk filled journey to the United States and Britain around the perilous Cape Horn.

You quickly realize that you have been fooled by the King of the Crimps, Joseph "Bunko" Kelly and forcefully drafted to work with the ships company of 12 British and 30 Cantonese sailors.

Ahead lies months, if not years, of dangerous, unhealthy, unsanitary conditions with little hope of pay. After weeks on the open sea, an impending storm drives the ship to seek refuge on a small island known to the locals as Samui.

Looking around the room, you make eye contact with a few of your shipmates, everyone quickly realizes, now is your only chance to escape! The Keying will set sail again in an hour as the tide waits for no man.

Your Captain, Charles Alfred Kellett, is no fool and it will not be easy to escape for he has rigged many obstacles.

The risks are high. If caught, you face a lifetime of punishment or worse, you could be hanged! The next 60 minutes will change your life forever.

You and your shipmates, must solve the clues, answer the riddles, find the hidden map, and get off the ship. Leave no stone unturned and above all, don’t forget to watch the clock for time is of the essence! Do you have what it takes to escape the clutches of Captain Kellett?