Right across from The Yard House, next to It's Sugar by the West Passage. 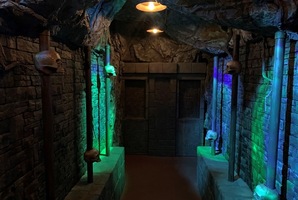 We went through the Bill and Ted's escape, but they have other movie-themed rooms as well. The puzzles were good, but the rooms were way more unique and detailed than other escape games we've been through. Looking forward to heading back to try the Terminator room soon!

Bill and Ted have taken a wild joyride into the future. Guests will soon learn that the time machine (phone booth) has lost power due to a damaged antenna and has become trapped between the walls of a mad scientist known as “The Collector”. Being a doer of evil deeds, he now has learned the secrets of Time Travel and used it to capture the life forces of the world’s most influential figures thus changing the course of history forever! Players will have to fix the damaged antennae, find a way to power-up the Time machine and release the captured life forces of Genghis Khan, Abe Lincoln, Socrates, Napoleon and our beloved Bill and Ted (and we can’t forget Rufus).